Throughout the 50s and into the 60s, Halibrand Engineering was the top supplier of components for the Indy roadsters. Halibrand supplied drivelines, quick change rear axles, front hubs, steering gears, and disc brakes. Most of these parts were buried inside the car and unseen by the fans.

One part, that Halibrand created, was right out there for everyone to see and epitomized the Indy roadster and the roadster era as much as the OFFY engine. The Halibrand Magnesium Roadster Wheel!

Halibrand started working on his magnesium wheels in the late 40s as a stronger, lighter replacement for the wire laced wheels used since the early 20s. Early development problems and resistance, from the racers, to the harsh ride characteristics of the rigid new wheels slowed their acceptance. (read my tech article, about wire lace wheels, on the “blog” page of my http://macmillersgarage.webs.com/ website.)

These “first design” Halibrand mags were available in two styles.

The first style was made, as a direct replacement to the wire wheels, to fit the existing Rudge-Whitworth splined hubs, which almost all of the existing cars had used for many years. The wing nut tapered seat was machined directly into the wheel. 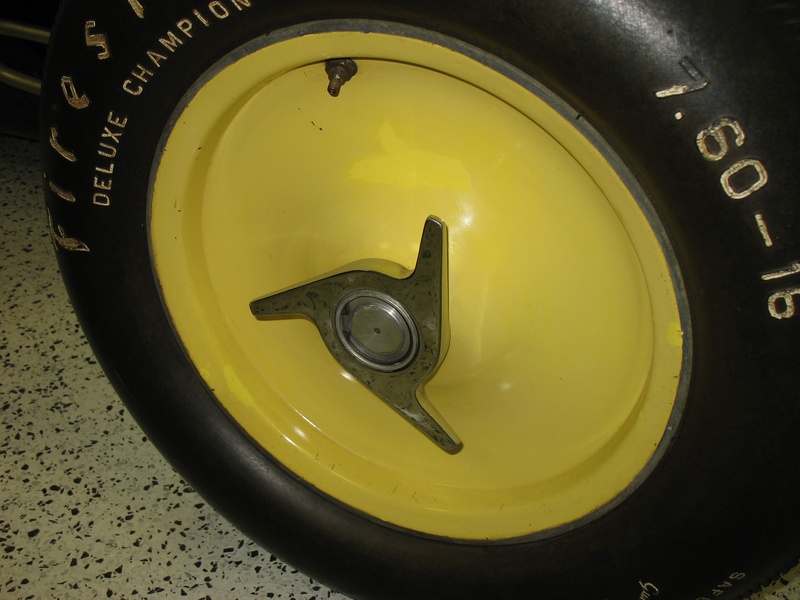 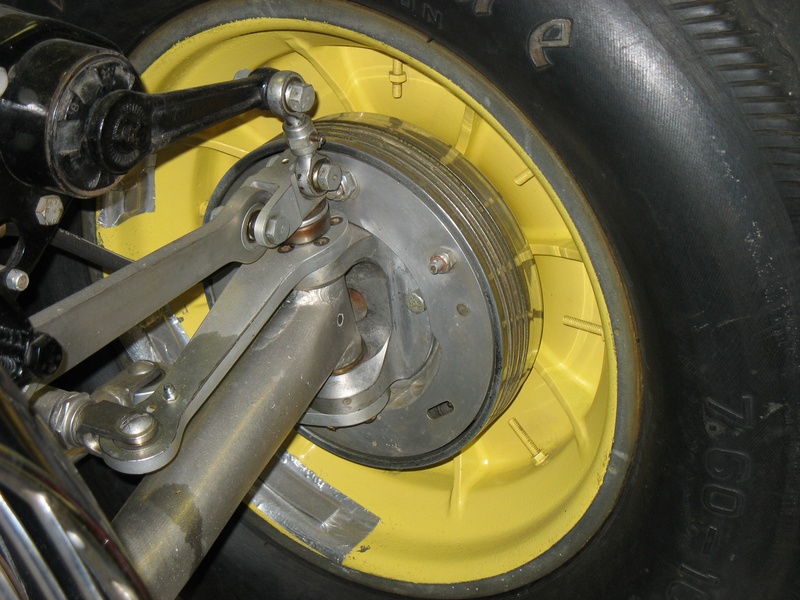 The second style was designed to fit Halibrand’s own new style hub using a six pin drive. These wheels were machined flat on both sides of the center mounting surface so that they could be mounted to the hub from either side of the wheel. This made for different wheel offsets, depending on which direction the wheel was mounted. These wheels used a separate “pressure plate”, with the wing nut tapered seat, to clamp the wheel to the axle or spindle hub. 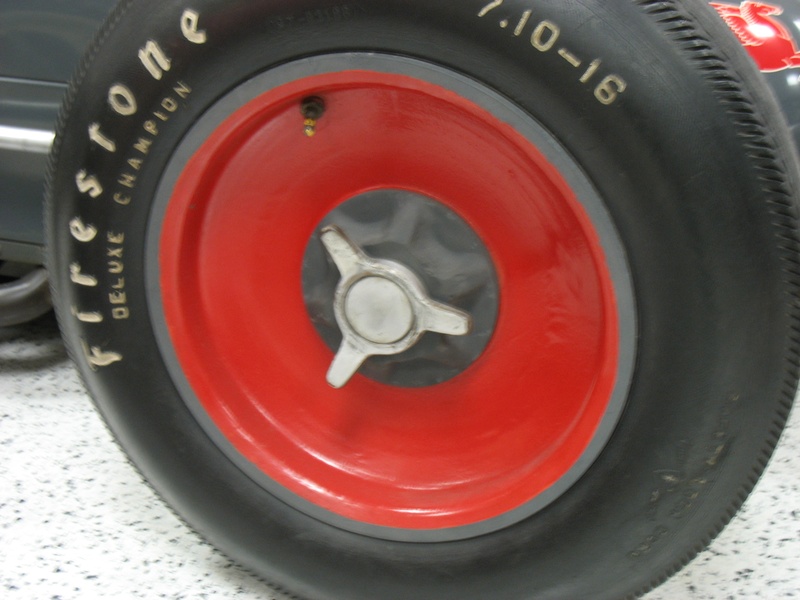 Halibrand 6 pin drive wheel mounted “back side” out. Threaded studs, sticking out around the wheel, were for attaching balancing weights as shown. 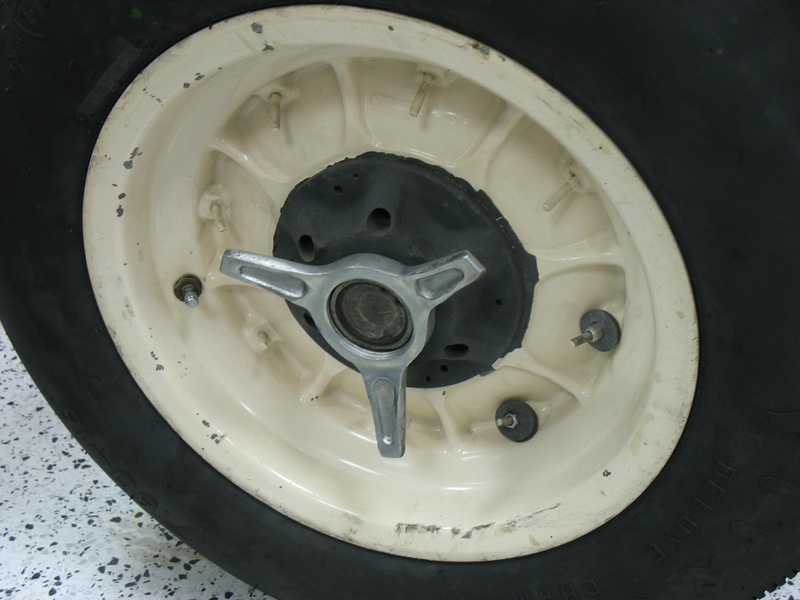 Technical specs of the reversible, six pin drive wheels were:

In 1950, a third of the Indy 500 starters were using the new Halibrand “mags”. New chassis setups were needed with the new lightweight, rigid wheels….Most likely, softer spring rates and, maybe even, lower tire pressures.

The advantages of the new lighter, stiffer wheels were better steering, braking and acceleration response.    Some guys were “fishing” for the new “setup” and ended up with a mix of “wires” and “mags” on the same car! The first mag wheel equipped car finished 5th.

In 1951, half of the “500” starters were equipped with the Halibrand mags, including the winning Balanger Spl. using the Rudge-Whitworth spline drive version.

As the “roadster era” began in 1952, almost three quarters of the starters were using the mag wheels, including the new Vukovich Kurtis roadster, equipped with the pin drive, reversible version.

The first 8 finishers were on “mags”

In 1953, only three cars used wire wheels. There were six Kurtis roadsters in the race, all equipped with Halibrand pin drive mags. The roadsters finished 4 of the 6 in the top ten, including the Vukovich winning car. Only one car continued to use the Rudge-Whitworth mag wheels.

The 1954 Indy 500 had 13 Kurtis roadsters in the starting lineup and only two cars still using the Rudge Whitworth splined hubs. The Vukovich roadster won again with only 5 of the 13 roadsters in the top 10 finishers.

The 1955 Indy 500 had 19 roadsters but only one “upright” car with wire wheels, on the rear…. Oddly enough this upright car, through some sort of weather anomaly, started from pole position. The winning car and six other roadsters finished in the top ten.

The holes created air flow to cool the brakes. These wheels were one inch wider, front and rear, to optimize the new wider Firestones. The new wheels were not reversible, with the wing nut seat cast into the front side of the wheel and there were no optional offsets or backspacing.

Technical specs for the “second design” Halibrand roadster wheels are: 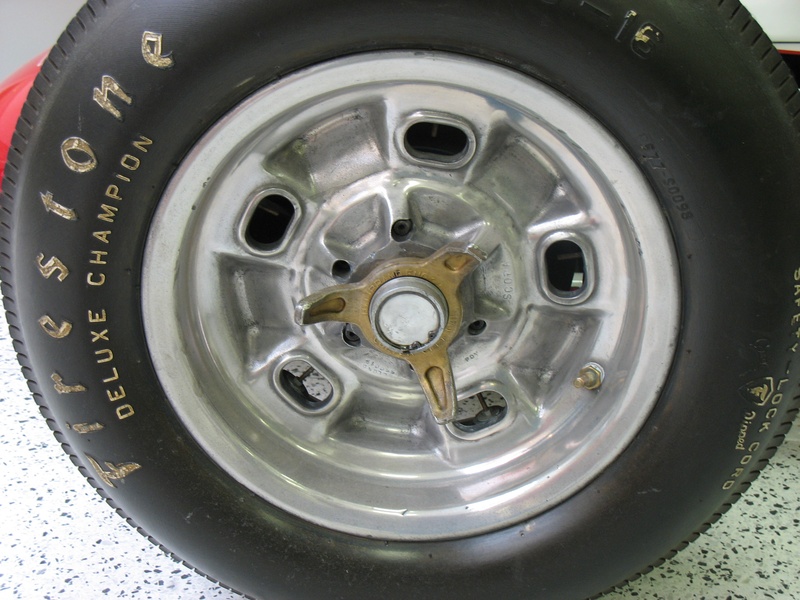 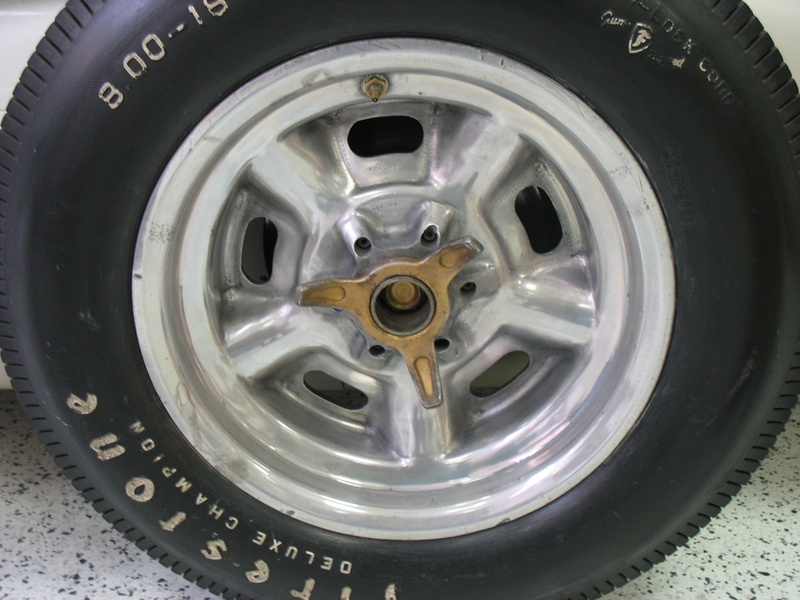 Other guys into the roadster building business were Jud Phillips, Ed Kuzma, and Lugie Lesovsky.

It was, also, the return of the NOVI in a new Kurtis rear drive chassis.

While the next six years(1957 through 1962), at Indy, saw great technical battles among the Epperly & Lesovsky “horizontal engines”, the Watson “vertical engines” and the NOVIs, the 16” and 18” Halibrand mags and Firestone tires continued to perform reliably and, virtually, unchanged throughout the greatest years of the roadster era.

A few additional comments about the 16” and 18” Halibrand magnesium roadster wheels:

• Even after the “second design” was introduced, the “first design” six pin drive wheels continued be used, for offset and track width variation, on into the 60s until the 15” wheels took over.

* There was a 20” version of the “second design” Halibrand wheel. I have never seen these wheels used on any roadsters other than the NOVIs.

•Although not done on the roadsters, several of the “upright” cars from 1952 through 1955 ran the race with a combination of “wires” and “mags” on the same car. Considering the much different dynamics of the two types of wheels, I won’t even speculate on what brought them to that setup but it would be similar to mixing radials and bias ply tires on the same car.

Top roadster drivers, Parnelli Jones and A.J. Foyt, who arrived at the track with the standard 16 and 18 inch wheels, "protested" the fact that Lotus had access to Firestone tires that they didn't have. Firestone said that they had built the tires to Lotus specs and Lotus had paid for the development of the tires. After more "discussion", Firestone agreed that they could produce more tires for the roadsters that wanted them

There were no 15" wheels that would fit on roadsters.

Halibrand went into action and scrambled up some 15" wheels that he was building for Shelby Cobras and other sports cars, that he was able modify to fit on the roadster hubs.

Apparently, the advantages of the 15" tires were greater than the problems they created because Parnelli was able to win the '63 "500" with the new wheel & tire setup along with the top four finishing roadsters. About half of the roadsters in the '63 field were, eventually, able to get the new "15s" with no apparent tire related problems in the race.

The specs for the wheels on Parnelli’s winning ’63 car are: 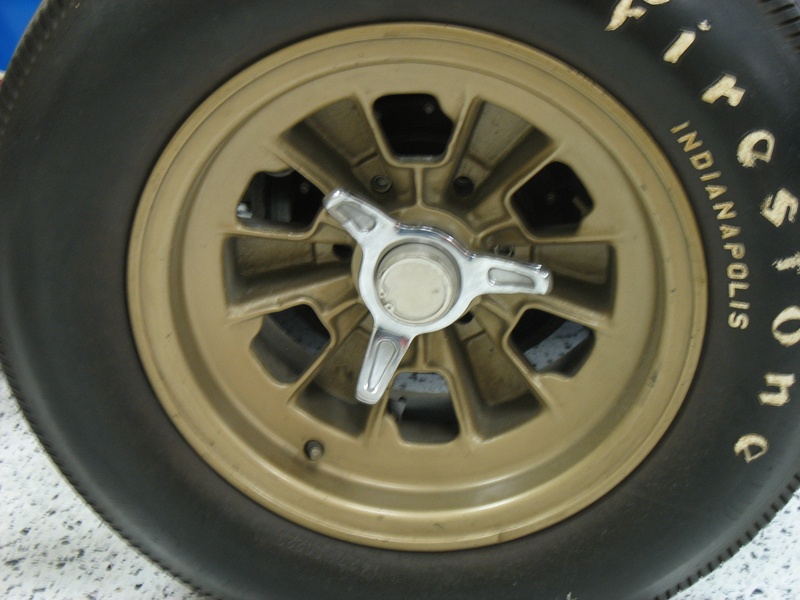 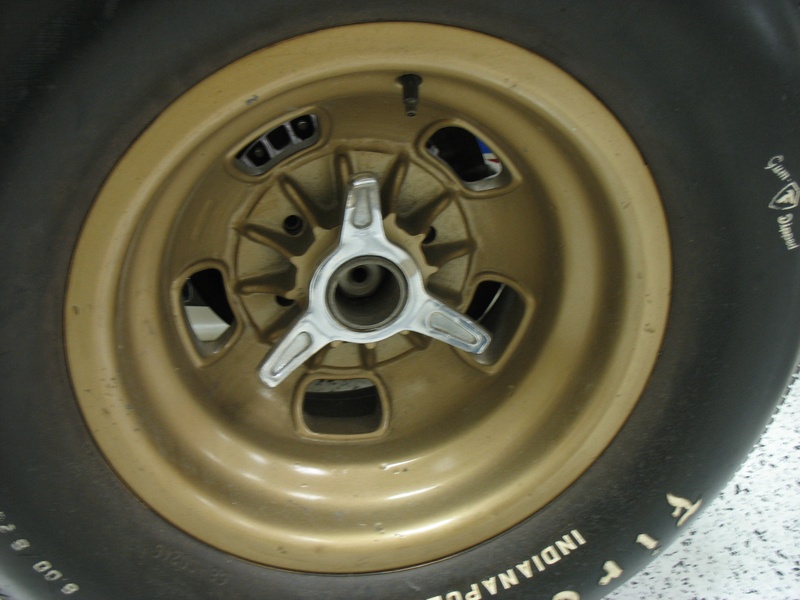 By '64, the 16 & 18 inch wheels had disappeared and Goodyear came sniffing around the Speedway.

For the ’64 Indy 500, Halibrand was able to design and build new 15” roadster wheels for the new wider tread Firestone tires and the, soon to arrive, Goodyears.

A.J.Foyt drove to the last roadster win in 1964 equipped with the new wide Halibrand 15” wheels and Firestone tires.

The specs for the new Halibrand wheels on A.J.’s ’64 winning car were:

All 15” Halibrands had an integral wing nut seat cast into the front side of the wheel so they were not reversible. I do not know if there were optional offsets. 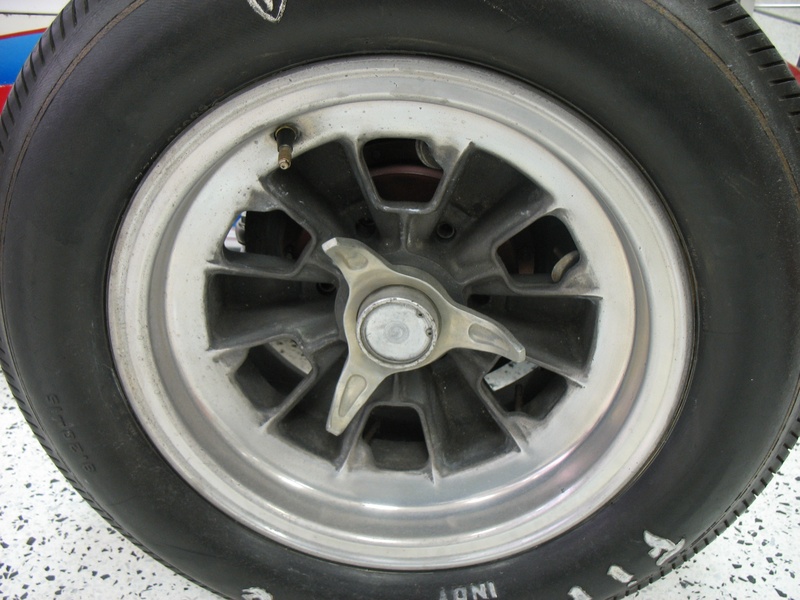 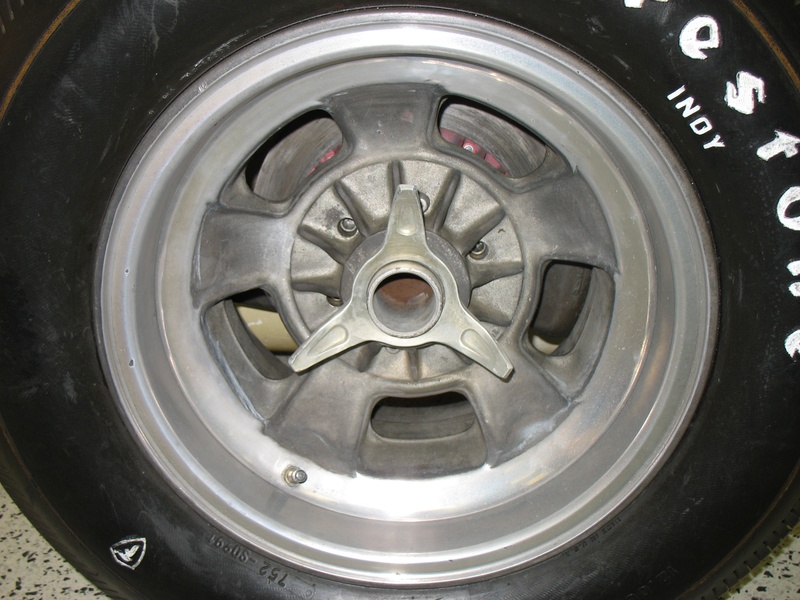 Also available, in 1964, were similar wide 16” diam Halibrands in the following sizes:

The main users of these 16” wheels were the NOVI roadsters.

While the roadster’s last Indy win was the 1964 race, they continued to race on into 1965 with 6 roadsters making the starting lineup. By '65, Goodyear came in full force and the tire war was on.

Our story ends In 1966, when the last standard front engine roadster started the Indy 500, ironically, on Goodyear tires. but the tire wars raged on into the 70s.

A remarkable fact is that, between 1952 and 1966, every roadster, that raced at Indy, used Halibrand magnesium wheels.

Any comments, questions and corrections are always welcome!